And This I Promise... 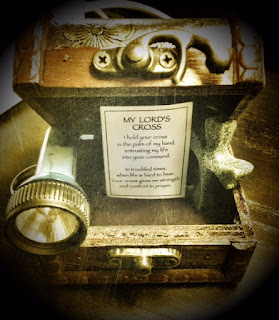 The first alarm went off at midnight, a shrill continuous thrusting of sharp metal through our eardrums.  Then we heard what I knew was coming, my autistic son's screams.

He wasn't hurt, just filled with terror, the kind that erases all rational thought.  His mind was on fire, not our house.  He screamed my name when he saw his father's image in his bedroom, "No!!  I need Mom!!"

He calls my name when he's afraid, as though I am omnipotent, the panacea for any ailment, any assault.  He has not yet learned that my skill set is limited.

A few months ago my nine year old son began having nightmares and developed a fear of fire alarms and thunder, of the electricity being cut off during a bad storm.  He hates shrill sounds and the absence of light.  These feelings are mostly universal, but the intensity of his emotional reaction is not.  His autism exacerbates these reactions, blows them far out of proportion.  He becomes paranoid, so much so that no matter where we go, he's watching the skies and assessing the risks, scoping out the ceilings and tops of walls, looking for the nearest fire alarms, looking for fire pulls.  If he can't find them he asks me to help.  I assure him that no storms are coming, that any rain will be gentle, that the fire alarms won't go off.  Unless, of course, there's a fire.  But there will be no fire, until there is one, but...  Don't worry, my love, Mommy's here.

When these fears began I decided to purchase a small crucifix for him, a crude rendering made of natural stone.  I placed it in a wooden treasure chest along with a small keychain flashlight.  I told him the stone cross would keep the nightmares away, and that if the electricity were to go out, there was a source of physical light in the treasure box.

I gave these crucifixes and treasure boxes to several boys who have autism.  They all attend a sacrament preparation class I co-teach at our Catholic church (a position taken to protect and keep an eye on my son).  All of the boys had tearfully described bloodcurdling nightmares and it broke my heart.  They think literally, so I knew a physical talisman would help, despite my lack of belief in the supernatural, no matter what form it takes.

It was no surprise when the boys' mothers reported later that the nightmares had stopped.

I'd known the crucifixes would be effective, not because of their shape or intended meaning, but because of the power ascribed to them.  My daughter had a similar item to sleep with when she was younger, a purple "dragon tooth."  We'd purchased the three-pronged "tooth" from the Texas Renaissance Festival in 2008, an item we had to take with us on every trip away from home lest she refuse to close her eyes at bedtime.

I glued the Dragon Tooth back together many times once her little brother was old enough to discover and break it.  At some point a tip of one of the prongs on the tooth was forever lost, which didn't render it any less potent.  The magic remained intact, and even now that my daughter is nearing her eleventh birthday and no longer needs the magic (or has assigned it elsewhere), she still keeps the Dragon Tooth for sentimental reasons.  It sits on her dresser beside a stack of dragon fantasy books, near her favorite jewelry, a few inches from a mirror she pays much more attention to these days.

Last night the alarm went off multiple times as my husband struggled to identify which battery was defunct.  There were several, it turns out, so I let my nine year old sleep in our bed, his cheeks still wet with tears.  He remained close to me all night, a part of him always touching a part of me -- a foot on a foot, his hand resting on my arm or gently holding my hand.  He needed to feel safe and secure, to attach to a more powerful source that would drive down the volume of his terror.

This morning we're all tired from last night's drama, from being awakened at midnight and again at 3 am.  My neck is stiff from remaining in the same position all night, stuck at the edge of the bed, stationary so as not to disturb the fragile tranquility of the sleeping child beside me.

The 9V batteries in every fire alarm will be replaced today.  They won't last forever, of course.  One day this or next year, per much experience, one or more batteries will fail.  At that time my son's terror will likely return.  There will be storms in the interim, our home rattled with intense thunder, the inevitable wrath inherent in nature, squashing our minuscule ration of power.

There will be darkness, which I cannot control.

All I can promise is my best effort, that I will be here to protect him as much as I can for as long as possible.  But my son knows deep in his bones that one day my energy will fail.  I will lose power and my physical light will burn out.  Until then I must teach him that his treasure is an abiding trust, an unyielding faith in something greater, an ideal held in our figurative hearts, or perhaps genuinely ascribe to something physical we can touch and hold, no matter its shape.

The goal is to feel safe, to be seen and loved by a warmth we can we can touch in our most vulnerable moments.  It is a universal prayer that crosses all divides, this reach for tranquility, for enduring light, no matter how ephemeral the source.
Posted by Teresa Cortez at 12:12 PM No comments: 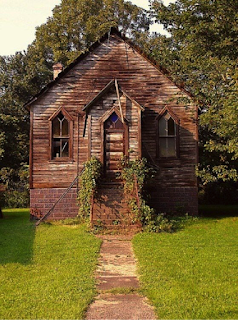 I’ve always had a thing for brokenness.  I’m drawn to broken people, broken lives.  I love the Japanese aesthetic, Wabi Sabi, which is a way of seeing beauty in brokenness.  Nothing is perfect, nothing lasts, nothing is finished.

This is probably why I’m so drawn to abandoned places.  I have a board on Pinterest for abandoned places — mansions, mental institutions, amusement parks, nuclear plants, farmhouses.  Every place has an essence, even unoccupied.  There’s something about an empty place, a place stopped in time, humans taken out of the equation. The stillness of inanimate objects and invasion of dirt, leaves and even trees, creates an echo of the past, creates the same melancholy in me as a long baleful train whistle.

Time has stopped in these places.  Memories have stopped.  But life is not stopped.

I can’t help but try to imagine the lives that once moved there.  I’ll imagine mentally picking up the trash, cleaning and straightening the curtains, fluffing pillows, vacuuming.  I add people, television sounds, music, stories, drama, and love.  But I can never get it right.  What came before is a mystery.  Where souls go when they abandon the body is even more of a mystery.

In most dream interpretation books, houses represent spirituality, like the home of the psyche.  Multi-storied houses are vast and perhaps more accommodating for old souls, etc.  There is meaning in hidden  rooms, behind locked doors, down below in the dark of the basement.

When I look at abandoned places, it’s like looking at a postcard from death.  The souls have all gone elsewhere and now there’s just stuff, soulless matter.  If the house were a repository for the soul, now the soul is gone, and the house is empty.  Like the body when we die.  The body is just stuff.  I want to donate my stuff when I die.  Why leave it to waste?

Anyway, here comes a segue…  Since I live in Autism World, I see a lot of disabled people, every kind of disability.  I see broken minds all the time, broken bodies, broken lives.  Some can not contemplate their own lives.  Which makes me wonder about the mind, the soul, the part of us that is believed by some to live on after we die.  Some believe that this part that lives on will inhabit a new and improved body, will have a  new brain.

Will my son be whole in heaven, if there is such a place?  Will he no longer struggle?  Will there be a forever home for his beautiful spirit?
Such a scenario would bring me great comfort, but I have my doubts.

If things are above as they are below, then who’s to say we don’t have abandoned houses in heaven?  Even stars die, and the rate of star birth is slowing.  The universe is full of black holes, black throats swallowing anything nearby, an emptiness so deep as to have tremendous mass and gravitational pull.  Not even light can escape.

Julian is starting to worry about dying, about me dying.  He says he wants to be with me forever.  The first time I tried to comfort him with talk of heaven, of us being there together one day, he thought for a moment then asked, “Will we play Angry Birds?”

In other words, will we have corporeal lives?  Things around us to knock on, taste, wrap our arms around?  I think not.  But I won’t be telling my son this.  He needs reassurance, to be certain there’s a place for us, a forever home.

A place is never just a place to me.  The older, the better.  I feel the rich texture of history in the oldest places.  I’ve been known to put my nose to the walls, to reach as far as my mind is able to sense the lives that came before, to honor them.

I did this once in an abandoned hospital.  The x-ray department was the only part of the building left operating and I was the sole employee.  Because I was rarely busy, I often took walks around the empty building.  The eeriest place was the surgical ward.  There were overturned tables and gurneys, a few tourniquets and empty glass canisters.  The walls were turquoise ceramic tile, still shiny.  The large domes of overhead lights were darkened, covered in dust.  Straggly wires protruded from broken intercom systems.

I stood for a long while in one particular suite, imagined all the life-saving surgeries that had taken place there.  I also imagined how many lives were lost, then wondered if it was truly possible for souls to literally float away from their bodies to occupy a corner near the ceiling, to watch human hands working frantically to save them.

In that moment I longed to gather all the lost souls, to give them a proper send off, say a few words in the room where they separated from their bodies or went out like a light.  I wanted to tell them someone was thinking about them, whomever and wherever they were now.  The room was so empty, so empty that emptiness felt like a heavy thing, like an entity.  The emptiness felt ancient, an unanswered ache from a bottomless forever. 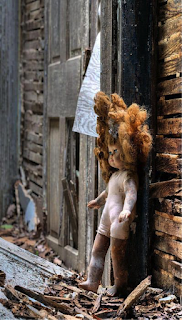 We’re told over and over again that the stuff of life doesn’t matter.  We’re told that our bodies will die, that we can’t take the stuff with us, that only the soul matters — the soul and love.  Which may be why that’s all I can think of when I look at an empty place, where neither exists.

I pine for the knowledge of what came before.  Were there children?  A father?  What was the last meal prepared in the empty pot on the stove?  Where did the sounds go?  The laughter in the amusement park.  The screams in the asylum.  The conversations about nothing, whispers in the dark, secrets and ‘I love you’s’.  The steady hum of unanswered prayers.

The blemished walls will never tell me. But there is life there, in the cells of the inanimate, in the secrets the walls keep. 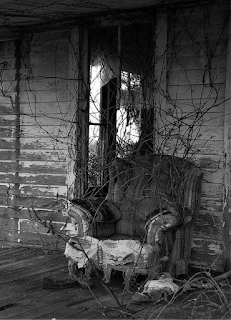